This post is an introduction for Qamel, a QML binding for Go that I created. It's released under MIT license and available here.

When building a modern desktop application, the first thing that come to the mind is Electron or NW.js. Both of them are based on Chromium and using Node.js. Thanks to this, creating desktop app in Electron and NW.js feels really familiar, as if building a normal web app. This means we get all benefits of creating web app in desktop, for example :

In other hand, since both of them are based on Chromium, they are quite heavy to use. It uses lot of memories, even when it’s only running and not used. It might be fine for some apps or games (e.g. VS Code, CrossCode), however it might be overkill for the simpler apps.

After looking around for a while, I learn about QML. QML (Qt Modeling Language) is a user interface specification and programming language, which allows developer to create a performant and flexible GUI. I believe it's a good alternative for Electron and NW.js, because :

As its name implies, QML is part of Qt framework which uses C++ language. Unfortunately, I'm more comfortable using Go language instead of C++, so I need a binding for QML in Go. There are several bindings that already exist, however one of them is not maintained anymore while the others are released under LGPL license, which doesn't work for my job.

With that said, I decided to create my own QML binding named qamel and released it under MIT license. It's still work in progress, but it's stable enough for my job, so I decided to share it here. However, since I only have access to Linux and Windows machine, I'm not sure if it will works in Mac OS. If you don't mind, go ahead and try it.

qamel is still work in progress and hasn't been tested on Mac OS.

I'm using Qt 5.12.0 and Windows 64-bit for this tutorial. Hopefully it's easy enough to follow in other operating system.

Before we start, make sure Go already installed on your system.

First of all, install qamel to your system by running :

Wait until the installation finished. Once finished, you can run qamel --help to check :

If it's error with message like "qamel: command not found", make sure $GOPATH/bin is accessible from your $PATH, because that's where qamel will be installed.

Next, install Qt on your system. If you are on Linux, make sure the required dependencies already installed on your system. Download the official installer and follow along the steps. In this tutorial, I will install it to C:\Qt\Qt5.12.0.

When asked to choose Qt's components to install, make sure to choose at least one of Qt5 version. In Windows, I recommend you to install at least these :

If you are using Linux, I recommend to install these components :

Once Qt installed, we need to set up a profile for qamel to use. Do it by running :

The command above will ask you to submit the information about your OS, build mode, and path to the Qt that you've installed before. Once finished, it should look like this :

Let's make a simple hello world app to see the basics of writing QML app on Go. First, create a directory in GOPATH for your application. For example, we will create $GOPATH/src/desktop-app. Next, populate the directory so it looks like this :

The code above will create a Rectangle as the base of the view. Inside that Rectangle, we put a Text with caption "Hello World" that filled its parent.

So, from these lines, the application will do several things :

Now, since the codes are ready, we will build the app. To do that, open terminal inside your project directory, then run :

Command above will build the app and save it as output/desktop-app.exe. The --copy-deps flag means all of Qt's libraries that our app use will be included to the same directory as the output path. So, it's recommended to set output path to its own directory, or else your project directory will be filled with its dependencies.

If all goes well, the build process should be finished with output like this :

Now, run the app and it should look like this : 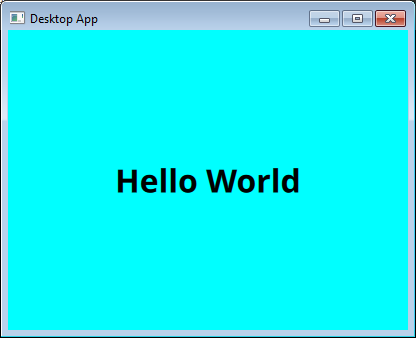 While the app still running, try to make some change in the res/main.qml and save it. For example, change the color to red. The app's UI should be updated automatically after you save the change.

The screencast above is recorded in Linux because my Windows VM is too slow to handle screen recording. It should be similar though.

Say you've finished creating a QML application and want to deploy it to public. Before releasing it, you have to modify some codes in main.go file, to make sure it's ready for deployment.

First, set the source for your QamelViewer to use qrc path. This is done to make sure your app uses QML file that embedded on your executable binary. This way, no matter where you put it, your app will keep on displaying the correct QML view. To do it replace this line :

and change it into :

Second, you have to disable file watcher for your viewer. To do so, you need to remove this line :

Now, the final code for main.go should look like this :

Sometimes we need to deploy our application statically or to other platform. Unfortunately, Qt that installed from official installer only supports building app for the same platform as where the Qt is installed. So, if you are using Windows and want to compile a Linux binary, you need to run a virtual machine and run Qt from there, which is quite annoying to do.

The official installer also only supports dynamic linking, so if you want to build a static app, you need to build Qt manually. And, since Qt is a huge library, it take a really long time to build it. In my case, it took almost three hours to build static Qt in Linux.

To avoid this issue, qamel supports cross compiling application using Docker image. All you need to do is to install Docker to your system, then build your app using qamel docker.

For example, if you are in Linux and want to build your app for Windows 64-bit, you need to open your project's directory from terminal, then run :

Or, if you want to build it statically, you can run :

There are several Docker targets available, which can be seen by running qamel docker -h :

For more detailed documentation about qamel, you can check godoc and wiki. For a more advanced demo, I've made a simple HackerNews reader built using Qamel, which available here. 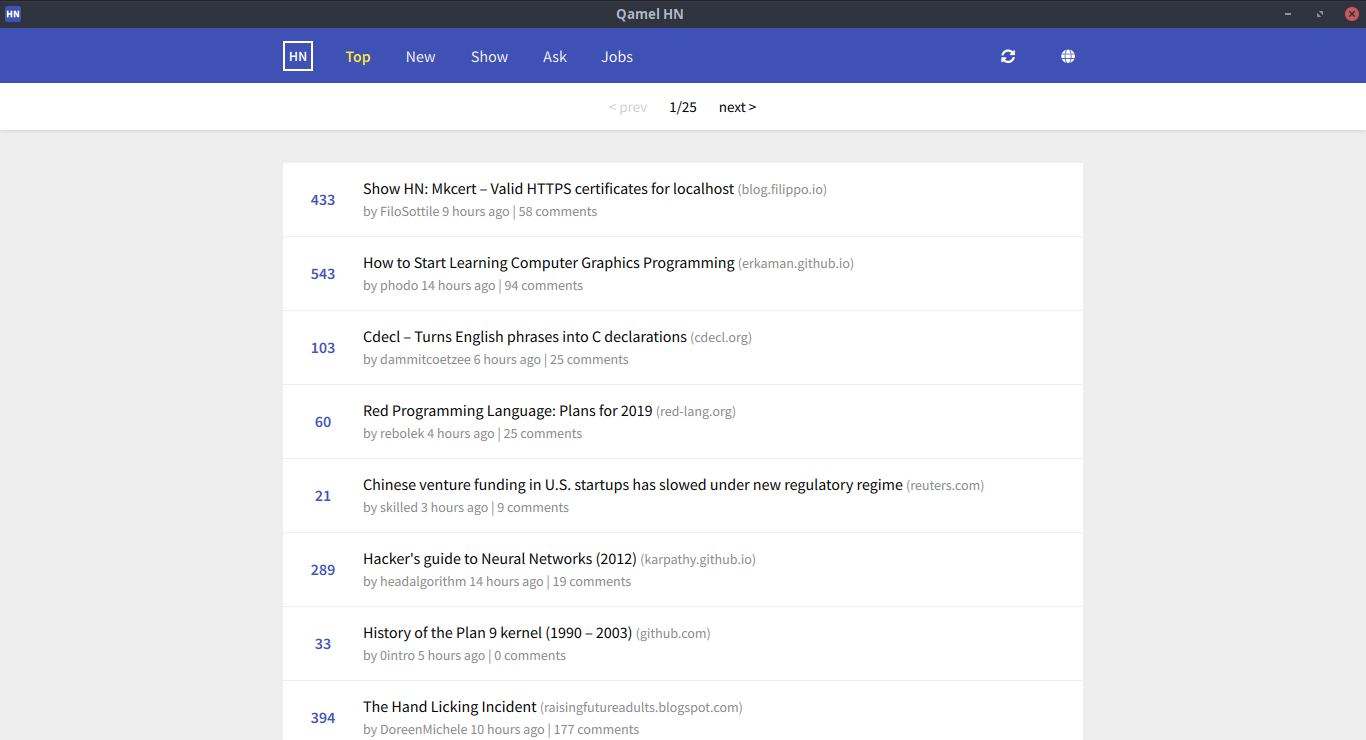 Right now Electron and NW.js almost become the standard for building a desktop application. Sure there are some cons from using them, like heavy memory usage and battery drain. However, the fact that it's easy to use, flexible to style, consistent across platform, and has huge JS ecosystem make the pros outweight the cons.

Unfortunately, in my job I asked to built a desktop app for retail, and the PC that used by company is quite old and has low specs (it uses Celeron processor and 2 GB RAM, which is quite small for modern standard). Sure Electron still works there, but not as snappy as I and the boss hoped. So, I decided to make this binding.

If you are constrained with low spec device like me, or you only need to built a simple app, I hope qamel can be an alternative for you.